The American Folklife Center at the Library of Congress will present traditional music and dance from a variety of folk cultures thriving in the United States and around the world in a new online concert series each Wednesday through September.

This year’s Homegrown summer concert series, “Homegrown at Home,” is being presented in a new online format, consistent with social distancing and safety practices in response to the COVID-19 pandemic.

“Homegrown at Home” kicks off on Wednesday, June 24, at noon Eastern time with the Riley Family Band, featuring Grammy-winning accordionist, fiddler and singer Steve Riley of the Cajun band Steve Riley and the Mamou Playboys. The series will continue throughout the summer with a new concert every Wednesday.

Each concert is pre-recorded at the home of the featured artists and presented on the American Folklife Center Facebook page on the scheduled date at noon Eastern time. During the concert premiere, viewers will have the opportunity to use the chat feature to engage with the artists in real time as they tune into the performance. All concerts will be made permanently available on the Library of Congress YouTube channel. The series is free and tickets are not required.

Jay Ungar and Molly Mason are an American roots music duo based in New York's Catskill Mountains. Ungar, raised in the Bronx, and Mason, originally from Washington state, have become one of the most celebrated duos on the American acoustic music scene since joining forces artistically. They are best known for their work on the soundtrack of Ken Burns' PBS documentary series, “The Civil War.” Jay's composition "Ashokan Farewell" became the musical centerpiece of the Grammy-winning soundtrack and was nominated for an Emmy. Ungar and Mason have recorded numerous albums of traditional and original fiddle music along with vintage country and jazz. They head the Ashokan Center, home of Ashokan Music and Dance Camps, founded in 1980.

The duo will perform material from the American Folk Center Archive.

Originally from Jacksonville, Florida, Walter Parks — a consummate guitarist — formed the duo The Nudes in 1991 and spent much of the decade touring with the group around the United States. After the duo’s breakup, Parks was enlisted as guitarist and right-hand man of Woodstock legend Richie Havens. With Havens, Parks performed at Madison Square Garden, Carnegie Hall and the Cannes Film Festival.

Through his deep interest in the music of his native region, he has become an expert on the American Folklife Center’s Francis Harper collection of folk music of the Okefenokee Swamp region of Georgia. For the Homegrown 2020 series, he will perform an entire program of material based on field recordings from the collections.

Carmen Agra Deedy is an internationally known storyteller represented in multiple collections at the American Folklife Center, and the author of 12 books for children, including “The Library Dragon,” “Martina the Beautiful Cockroach,” and the New York Times’ bestseller “14 Cows for America.” Funny, insightful and frequently irreverent, Agra Deedy’s narratives are culled from her childhood as a Cuban refugee in Decatur, Georgia. She is host of the four-time Emmy Award-winning children’s program, “Love That Book!” She is an accomplished lecturer and a collector of oral histories.

Agra Deedy has appeared many times at the National Book Festival, and told stories in the 2016 Homegrown series.

Raised in the U.S. Balkan diaspora, Brooklyn-based Eva Salina is a groundbreaking interpreter of Balkan songs. Eva's duo partner, Peter “Perica” Stan, is a New York City-based, Serbian/Romanian Roma accordionist known for his playful innovation and soulful, intuitive improvisations. Amplifying voices of past generations of musicians, Salina and Stan employ tenderness, grace, passion and a commitment to keeping these songs alive and evolving, while inspiring and teaching young people in the Balkans and the Balkan diaspora to participate in their own living traditions.

Salina and Stan performed in the 2019 Homegrown series. Their 2020 performance will include material sourced from the American Folklife Center’s archival collections.

Si Kahn has worked for over 45 years as a musician as well as a civil rights, labor and community organizer. He began his organizing career in 1965 in Arkansas with the Student Nonviolent Coordinating Committee (SNCC), the student wing of the Southern Civil Rights Movement. During the War on Poverty, he served first as a VISTA Volunteer and later as deputy director of an eight-county community action agency in rural Georgia where he also coached the first racially integrated Little League team in that part of the state. As a musician, Kahn has performed internationally at concerts and festivals. His musical body of work includes 15 albums of original songs for adults and children, plus a collection of traditional labor, civil rights and women's songs recorded with Pete Seeger and Jane Sapp. His songs of family, community, work and freedom have been recorded by more than 100 artists and translated into half a dozen languages, including French, Welsh, Hebrew, Swedish, Drents (a Dutch dialect) and Plattdeutsch ("Low German"). Such songs as “Aragon Mill” (aka “Belfast Mill,” “Oregon Mill,” “Douglas Mill,” “Weave and Spin”), “Gone Gonna Rise Again,” “Go To Work On Monday” and “Rubber Blubber Whale” have become a part of the oral tradition, and are sung around the world in folk clubs, in living rooms, at rallies, and on picket lines. He first came to Archive of Folk Culture at the Library of Congress as a teenager and has continued to do research in the archive – now part of the American Folklife Center – ever since.

Joe Jencks is a 20-year veteran of the international folk circuit, an award-winning songwriter and a celebrated vocalist based in Chicago. Jencks has spent the last 15 years touring full time. He is noted for his unique merging of musical beauty, social consciousness and spiritual exploration. Jencks has written several influential songs, including “Lady of The Harbor,” and is known for songs that explore labor and working-class culture. He is also co-founder of the harmony trio, Brother Sun.

Jencks has performed in the American Folklife Center’s Archive Challenge several times, and for the 2020 Homegrown series he will perform an entire program of material based on field recordings from the collections.

Born in Philadelphia, Reggie Harris is a singer, songwriter and storyteller on a mission to educate, entertain and inspire. For over 40 years, he has captivated audiences as part of the duo Kim & Reggie Harris. Known for his powerful voice and guitar, the depth and insight of his songwriting, and his deep knowledge of traditional African American spirituals and freedom songs, Harris remains in high demand as a concert artist. He has performed at festivals and universities, and teaches workshops on songwriting, community building, race relations and performance.

Dom Flemons, known as “The American Songster” since his repertoire covers over 100 years of American folklore, is a Grammy Award winner, two-time Emmy Award nominee and 2019 Wammie Award winner originally from Phoenix, Arizona. After co-founding the Grammy-winning group the Carolina Chocolate Drops, Dom has pursued a solo career since 2014.

Flemons is a music scholar, historian and record collector, as well as a multi-instrumentalist who plays banjo, guitar, harmonica, jug, percussion, quills and rhythm bones. In 2018, he released the album “Dom Flemons Presents Black Cowboys on Smithsonian Folkways,” which received a Grammy Award nomination. The recording was co-produced by the Smithsonian’s National Museum of African American History and Culture.

Flemons has conducted research on American Folklife Center collections for over a decade. He was one of the original artists featured in the first Archive Challenge, and his repertoire includes many songs learned from recordings of master musicians in the archive.
___

The Homegrown concert series has presented the very best of traditional music and dance from a variety of folk cultures in the United States and beyond since 1977. The center works closely with folklorists in each state to identify artists and styles of performance unique to their region to present the multicultural richness of folk arts.

The American Folklife Center was created by Congress in 1976 and placed at the Library of Congress to “preserve and present American folklife” through programs of research, documentation, archival presentation, reference service, live performance, exhibition, public programs and training. The Center includes the Archive of Folk Culture, which was established in 1928 and is now one of the largest collections of ethnographic material from the United States and around the world. Please visit the American Folklife Center and the Homegrown concert series for more information.

The Library of Congress is the world’s largest library, offering access to the creative record of the United States — and extensive materials from around the world — both on-site and online. It is the main research arm of the U.S. Congress and the home of the U.S. Copyright Office. Explore collections, reference services and other programs at loc.gov; access the official site for U.S. federal legislative information at congress.gov; and register creative works of authorship at copyright.gov. 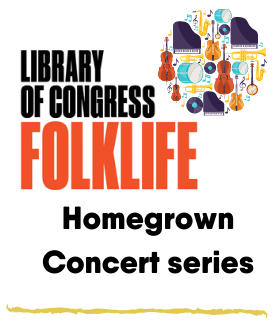 The Library will be closed on Friday, June 25 for our catalog migration.